At EUBCE 2019 in Lisbon, Portugal, between 27 and 30 May 2019, altogether four presentations were given by colleagues who are working together to realize the new BABET-REAL5 2G bioethanol production concept that shall be sustainable, economic viable and create jobs in rural regions. Susana Marques (LNEG), Aleta Duque (CIEMAT), Carmina Montiel (UNAM) and Ingo Ball (WIP Renewable Energies) presented results from their work carried out until the time of the conference.

On 28 May 2019, two oral presentations about BABET-REAL5 were given by Dr. Susana Marques from LNEG (Portugal) and by Dr. Aleta Duque from CIEMAT (Spain). 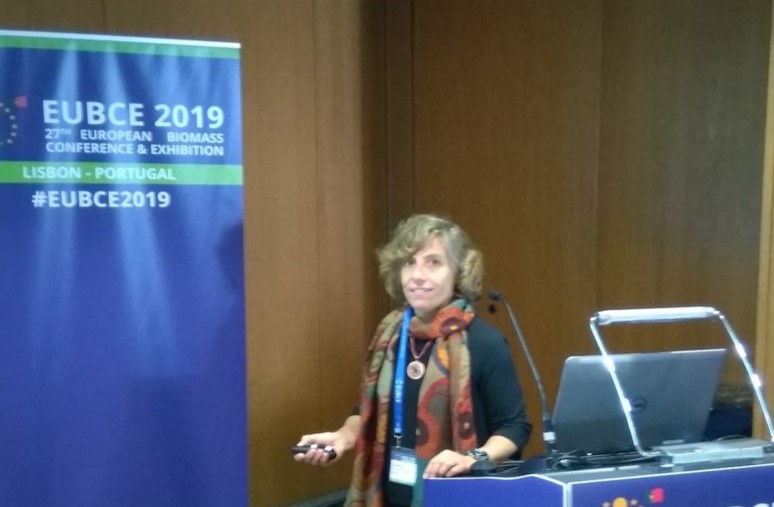 In her presentation, Dr. Susana Marques revealed results of the work carried out in frame of BABET-REAL5 targeting the on-site production of novel xylanases to be applied for the conversion of lignocellulosic biomass into ethanol.
The importance of this study lies in the fact that enzymes cost still constitutes one of the major barriers for the commercial implementation of lignocellulosic ethanol. Therefore, search for more efficient and cost-effective enzymes is required. While efficient commercial cellulases are available, the different hemicelluloses found in nature require the development of feedstock-specific hemicellulases.
Under this strategy, Susana Marques presented the study carried out using barley straw as feedstock and Moesziomyces aphidis, yeast previously reported as efficient producer of cellulase-free xylanases. Firstly, she showed the extracellular production of high levels of xylanase activities by M. aphidis using barley straw pre-treated through mild alkaline extrusion by partner CIEMAT. Thereafter, the performance of the enzymatic crude extract produced was assessed in the hydrolysis of the same pre-treated BS substrate under high solids loadings (up to 25% (w/v)). The presented results demonstrated the successful application of those novel xylanases to boost the conversion of BS, applied in supplementation of commercial cellulases or alone for promoting the selective pre-hydrolysis of xylan that might favor the co-fermentation of xylose and glucose in the subsequent SSF (Simultaneous Saccharification and Fermentation) step.
In sum, this presentation demonstrated the on-site production of efficient and cost-effective xylanases providing an attractive integrated solution for the conversion of lignocellulosic feedstock, which might lead to lower operational costs in 2G bioethanol plants. 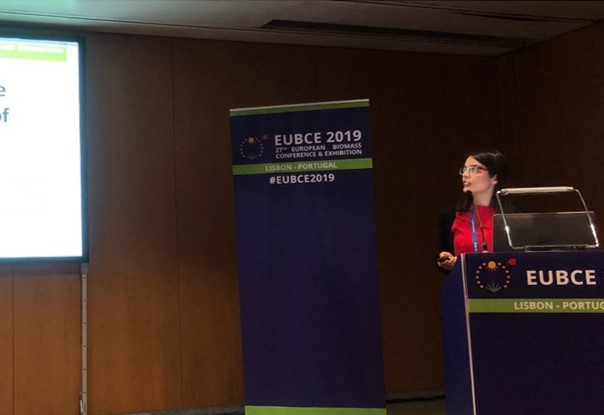 Dr. Aleta Duque, from CIEMAT, gave an oral presentation about “Alkaline Extrusion as a Versatile Method for the Pretreatment of Different Lignocellulosic Biomasses”, giving insights in the research on best pretreatment conditions for the BABET-REAL5 concept. For this presentation, four lignocellulosic biomasses (barley straw, wheat straw, eucalyptus wood and olive stones) were submitted to extrusion with NaOH followed by neutralization with H2SO4. The performance of the pretreatment in terms of process variables and effect on the enzymatic digestibility of the extrudates was studied. Adaptations of the extrusion configuration including modifications of the alkali load and temperature were made to improve the results on the most recalcitrant biomasses. Aleta Duque showed, that barley straw was the easiest biomass to extrude and low alkali ratios and moderate temperature are enough to achieve a good hydrolysis yield of both glucan and xylan. Wheat straw, although far from the optimum conditions, was also quite susceptible to the action of the pretreatment, confirming the better suitability of extrusion to herbaceous type biomasses. Thus, it was concluded that straw was a better substrate for alkaline extrusion, whereas eucalyptus wood and olive stones were harsher to pretreat.

On 29 May 2019, one oral and one visual presentation were given by Ingo Ball from WIP Renewable Energies (Germany) and by Dr. Carmina Montiel from UNAM (Mexico). 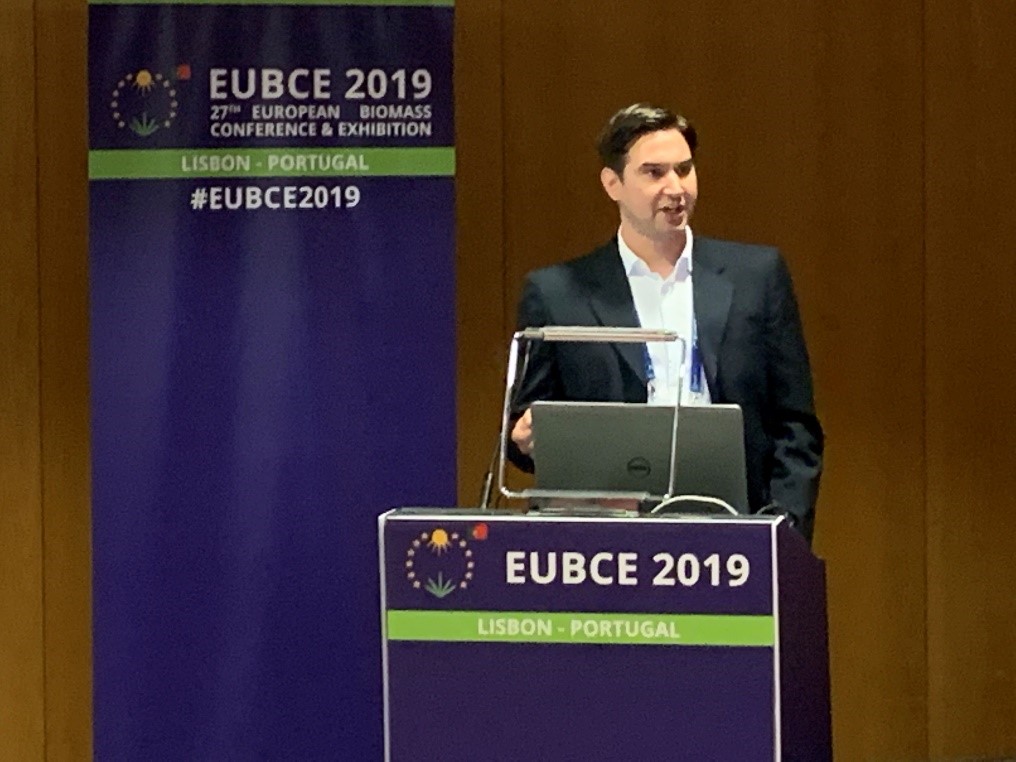 In his presentation “The BABET-REAL 5 Project – Preparing the implementation of a second generation (2G) bioethanol plant in Bavaria”, Ingo Ball gave an update about the business case study for Bavaria. He showed that in Lower Bavaria, around the city of Landshut, enough residual feedstock is available for the small-scale (minimum threshold: 30,000 tdm/year) production of second-generation bioethanol without having a negative impact on the agricultural lands (i.e. soil carbon). More than 120,000 t of wheat straw would be available for the BABET-REAL5 concept if the economic conditions are viable. Further aspects (e.g. availability of operating materials) need to be considered to find the most suited location and ensure sustainable feedstock production for the bioethanol production plant. Ingo Ball showed therefore the results for the framework conditions in the centre of the target area, including skilled workforce, logistics (traffic connection), exportation possibilities (bioethanol, biomethane) and importation possibilities (electricity, natural gas, operating materials, water). He revealed that the framework conditions for a potential plant were good enough also in a rural region like the investigated one and presented Neufahrn (Niederbayern) as potential site. He then showed that for the provided biomass at plant gate one needs to calculate with a price range of 75 to 106 € per ton dry matter. This is a realistic prize for Germany and may be a challenge to make the concept economic viable. Therefore, a focus must be laid on the valorization of occurring byproducts. It was also found out during the investigation, that in Bavaria, the farmers’ confidence in political decisions has been destroyed with first supporting national biofuels and thus stimulating investments, and then taking down the subventions and bringing an end to many local businesses. This confidence must be restored again to improve the probability for farmers’ involvement as feedstock supplier. Another finding was, that in the target region in Lower Bavaria, only one company is specialized on straw logistics. Thus, it needs to be found out whether this service can be provided also in the future, and if there are chances to get more agricultural companies involved in this business. 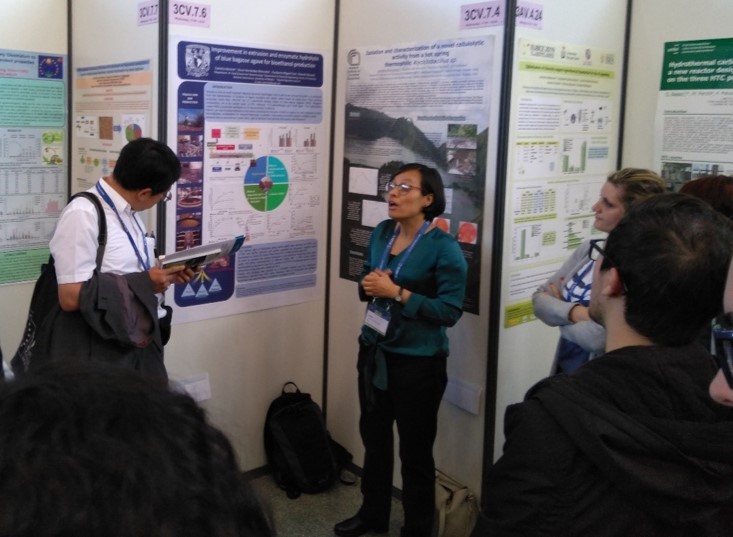 Dr. Carmina Montiel during her presentation at EUBCE 2019

In her presentation, Dr. Carmina Montiel started with information about the feedstock used in Mexico. It comes from residues of the Tequila industry, after fermenting fructans of Agave tequilana var. weber, better known as Agave Azul. That process produces more than 300,000 ton of a semisolid residue known as blue agave bagasse (BAB). With a BAB composition, on a dry weight basis, is 47% cellulose, 17% hemicellulose, and 18.4% lignin, BABis a potential candidate for its bioconversion to ethanol. In her presentation, Carmina Montiel informed about enhancements in the chemo-mechanical extrusion of BAB to improve not only cellulose but also hemicellulose availabilities for enzyme hydrolysis.
She mentioned in addition, that fine-tuning of enzyme reaction conditions were assayed in order to increase the concentration of fermentable sugars. A recombinant yeast, able to ferment both glucose and xylose, was employed.
Concluding, she revealed that the highest yield of hydrolysis using Cellic Ctec2 was obtained at 150 °C and 3.75 % w/w NaOH, glucose and xylose produced by enzymatic reaction were fermented by Cellux 4 to reach more than 80% of ethanol yield after 96h. In order to increase the xylose production a pre-selective hydrolysis was done using NS-22002 hemicellulose at different doses with 1 FPU. Once xylose accumulation is reached in just 48 h, addition of 9 FPU of cellulase brings a rapid conversion to glucose after additional 48 h. Finally, this strategy was applied to a fed-batch reactor and the maximum consistency reached was 40% (w/v). However, rates of hydrolysis and ethanol production are reduced when consistency increases to 40%.

All four presentation showed the progresses of the BABET-REAL5 Project and displayed the detailed approach in which the investigation on the new concept is carried out.