The target is to reach technical, environmental and economic viabilities in production units processing at least 30,000 tons equivalent dry biomass per year. This approach will definitely enlarge the scope of biomass feedstock exploitable for the production of biofuel and create better conditions for the deployment of production sites, to the benefit of rural areas in Europe and worldwide.
This workshop was organized in cooperation with WIP Renewable Energies and the KoNaRo – Centre of Excellence for Renewable Resources.
In the 1st BABET-REAL5 Workshop, the BABET-REAL5 project approach was presented as well as findings for Lower Bavaria. Furthermore, framework conditions and risks and chances of a decentralized biofuel production were discussed.

Workshop Summary
The BABET-REAL5 workshop participants were welcomed in the morning by Volker Sieber, who is Principal and Professor at TUM Campus Straubing and also member of the Bavarian expert council of bioeconomy and who introduced the KoNaRo and activities in Straubing. Further welcome words were given by Rainer Janssen, Managing Director Projects at WIP Renewable Energies, who thanked especially Volker Sieber and Klaus Thuneke (TFZ) for the very good cooperation regarding the organization of the event in Straubing, and Julio Valles, coordinator of the BABET-REAL5 project who started the workshop with an introduction about the BABET-REAL5 project. 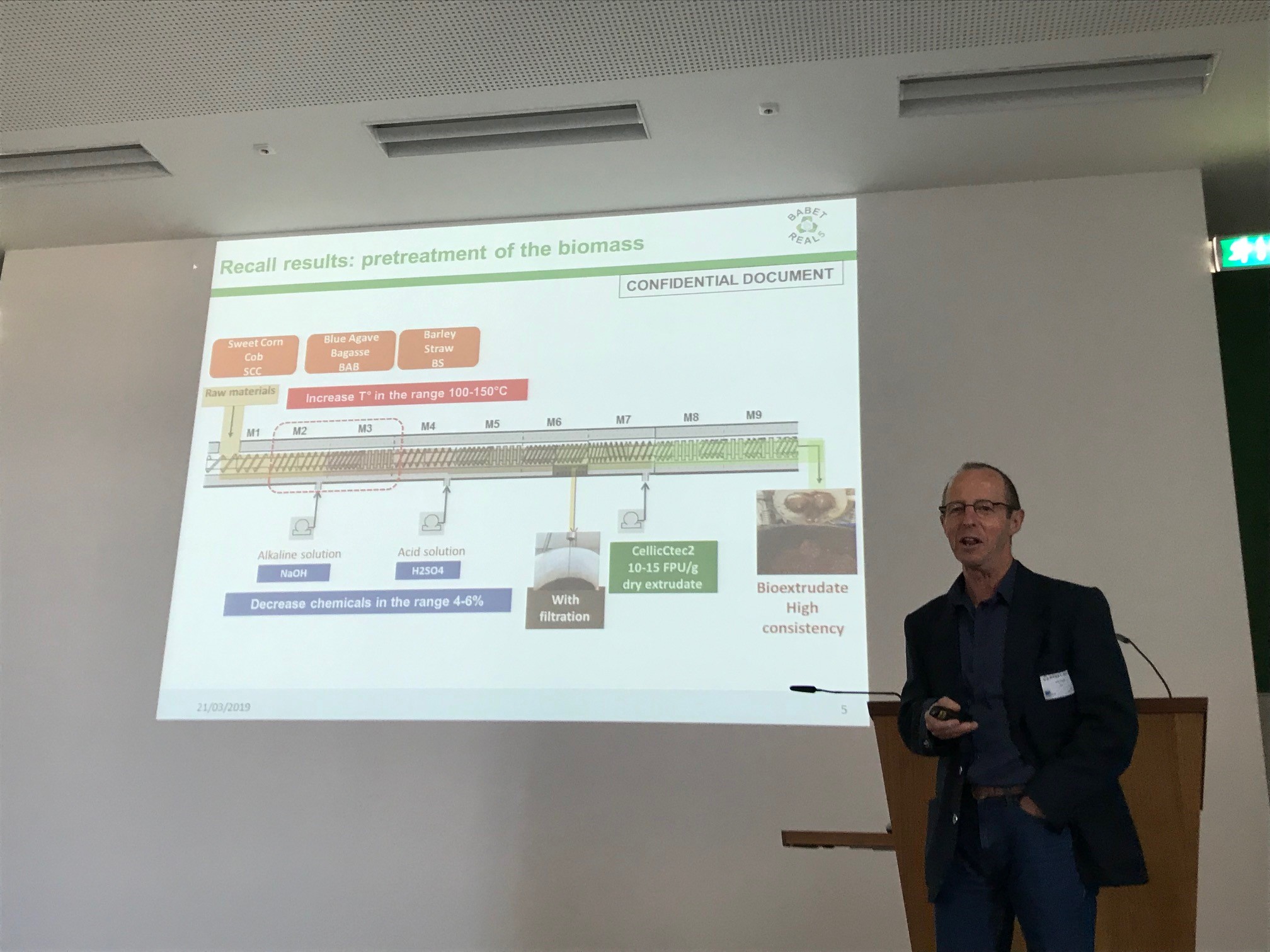 Starting, Julio Valles informed about the general objectives of BABET-REAL5, which are to achieve favourable techno-economic and environmental performances for the production of 2G ethanol from lignocellulosic biomass in small-scale industrial plants... 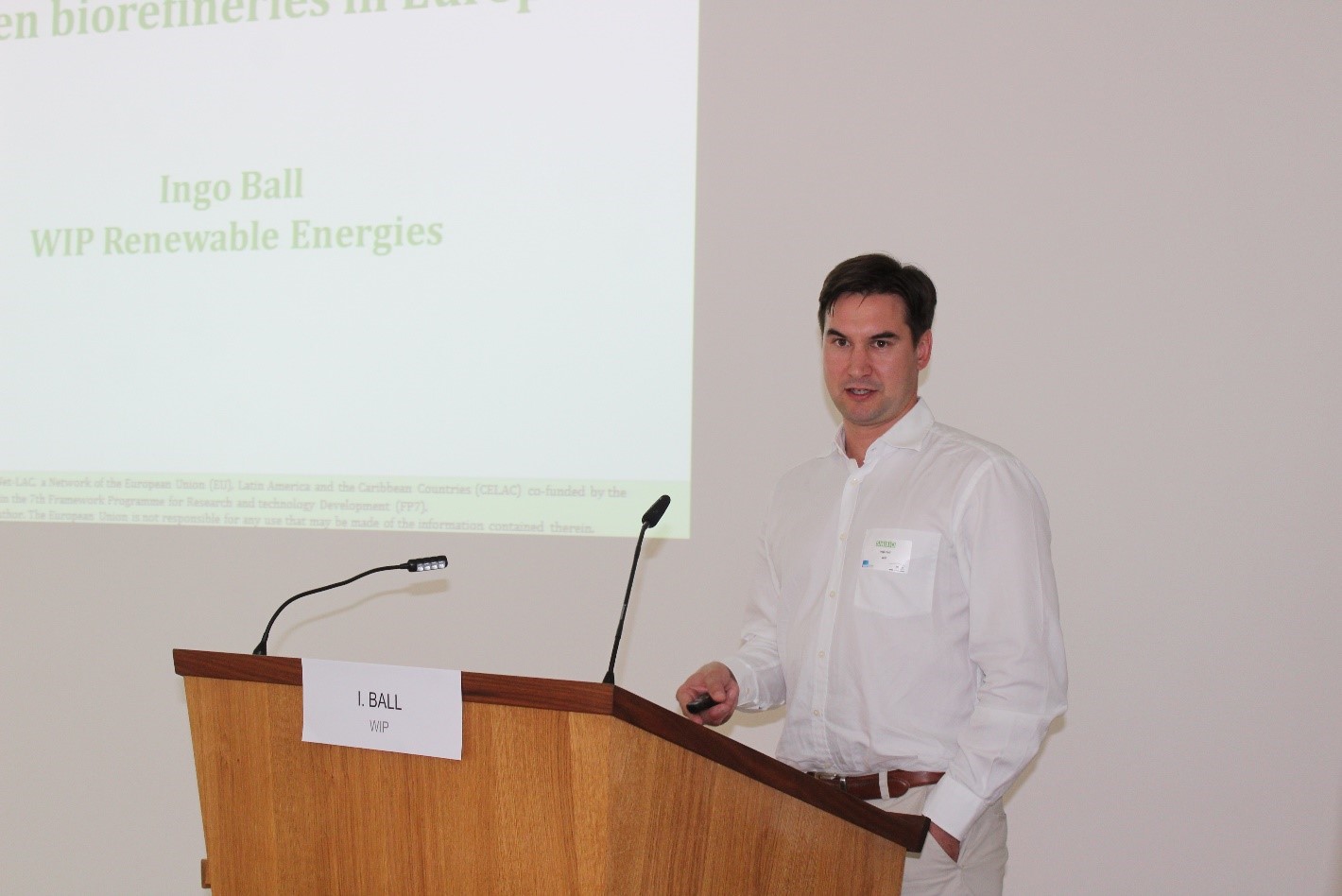 The next presentation was given by Ingo Ball, who is a project manager in the unit Bioenergy & Bioeconomy at WIP Renewable Energies. It was about the biomass conditions in Bavaria for the BABET-REAL5 project. 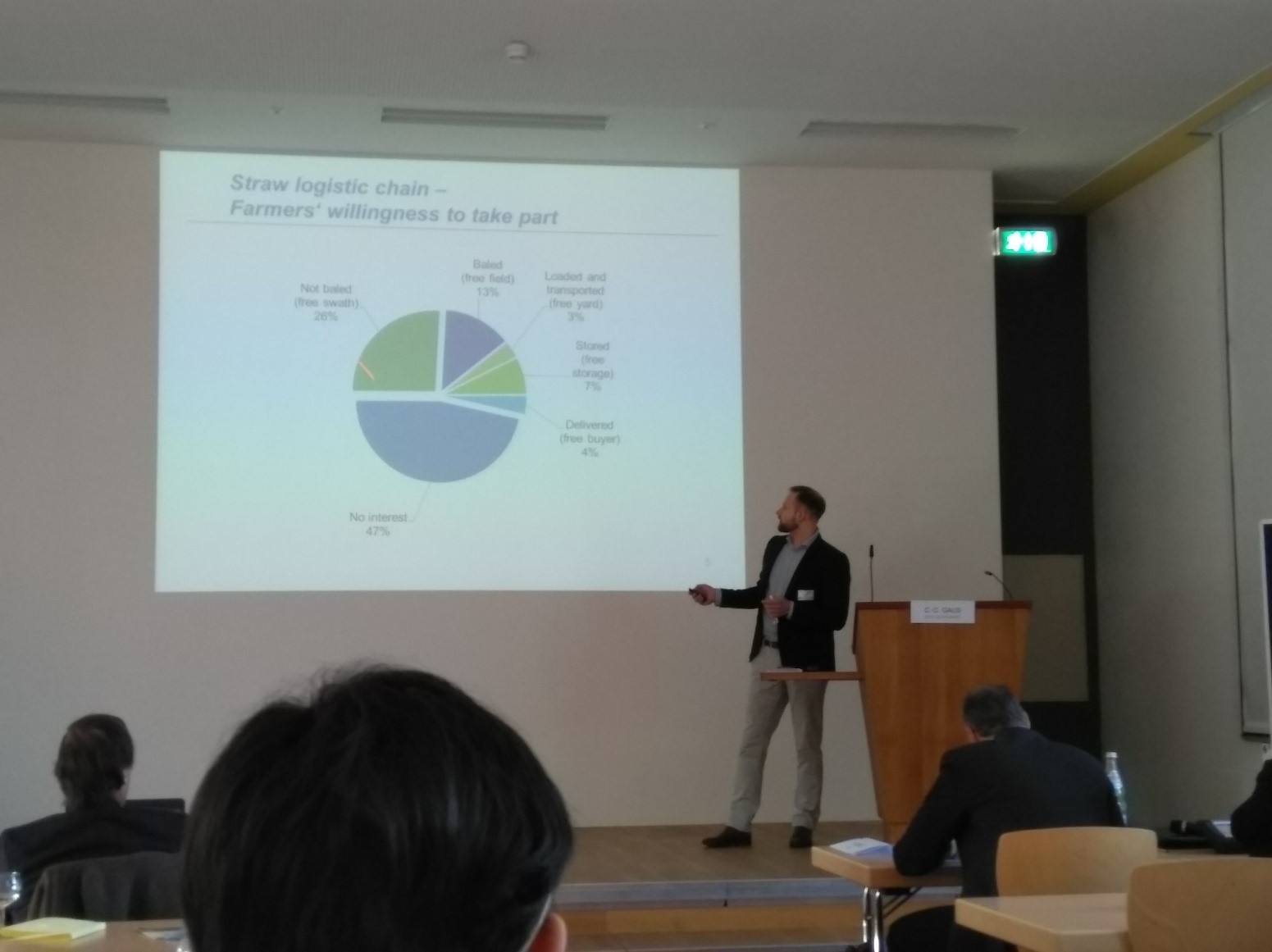 Cord-Christian Gaus during his presentation in Straubing

The presentation about the framework conditions in Lower Bavaria was followed by the German Agricultural Economist Cord-Christian Gaus, who has investigated in detail the farmers’ willingness to sell straw under different conditions.

Francisco Gírio: Legal framework in the EU for biofuels 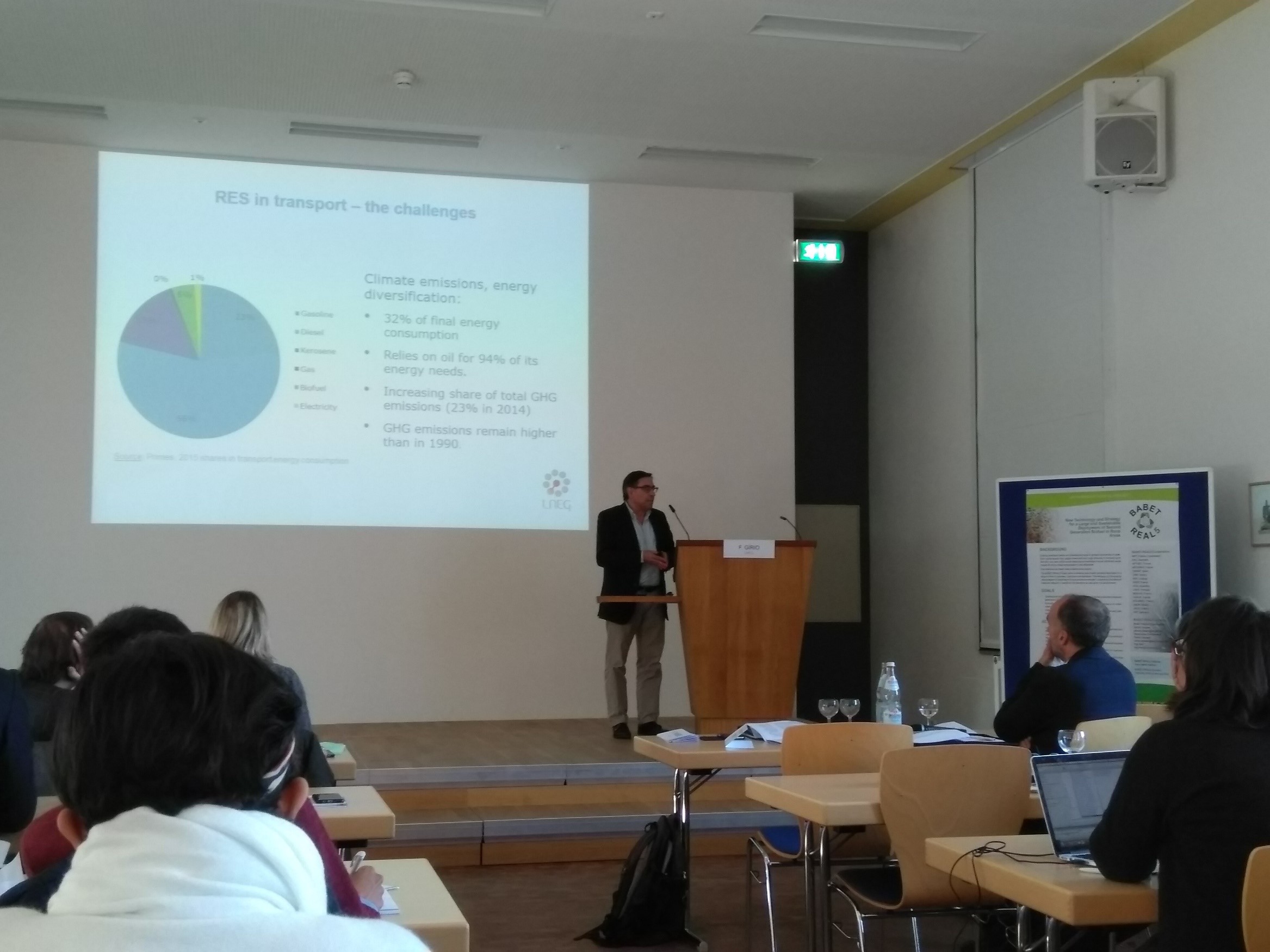 Francisco Gírio, principal researcher and Head of Bioenergy Department of LNEG in Portugal, continued the presentations and informed the participants about the legal frameworks for biofuels in the EU. 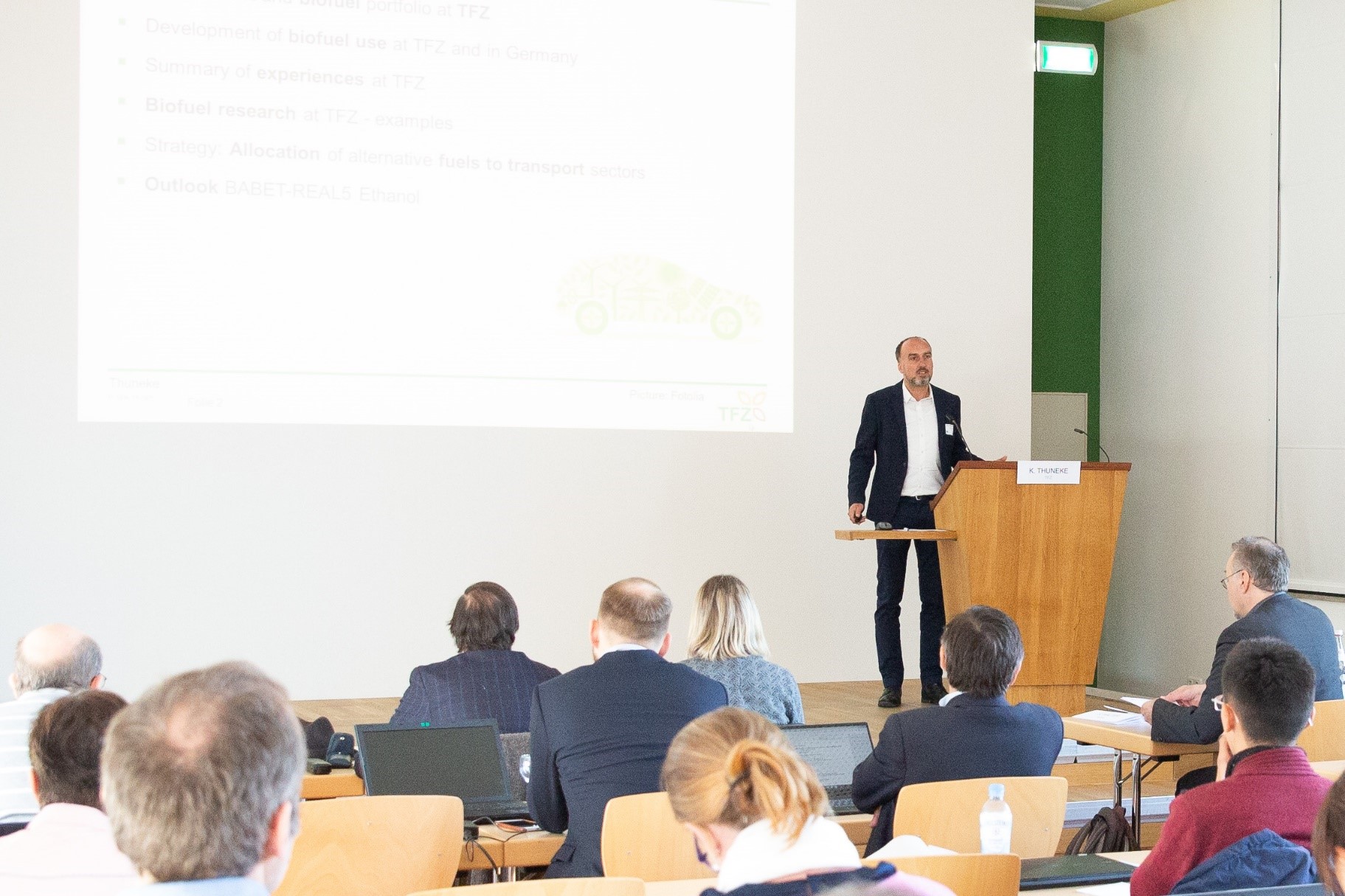 Klaus Thuneke, who is deputy manager of the department for Biofuels, Biolubricants and Process Materials at Technology and Support Centre (TFZ) in the Centre of Excellence for Renewable Resources in Straubing informed the participants then about the experiences with biofuels in daily operation. 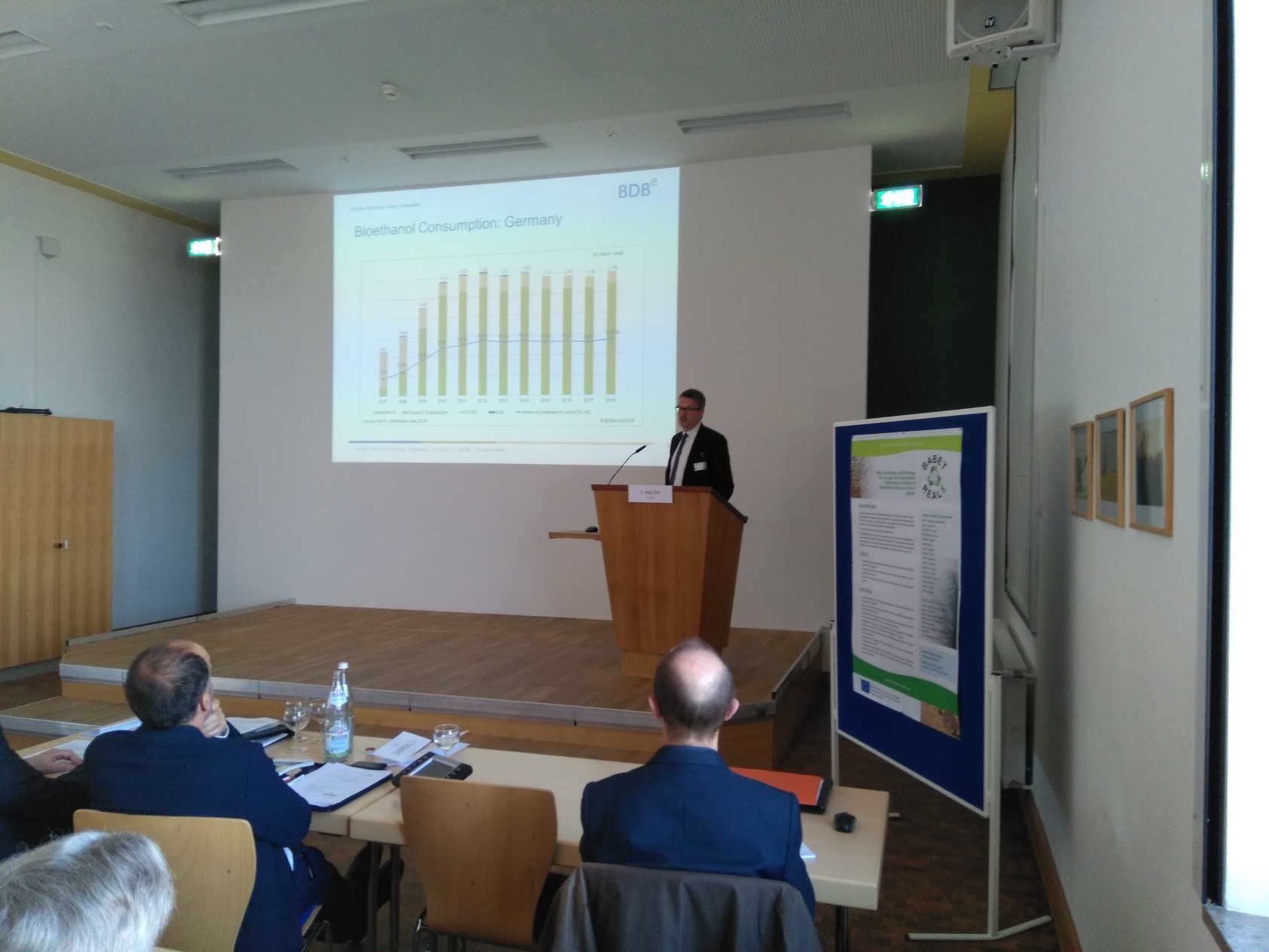 The next presentation was then given by Stefan Walter, who is Managing Director of the German Bioethanol Industry Association (BDBe) and was about Market Data and Policy Framework post 2020 for bioethanol. 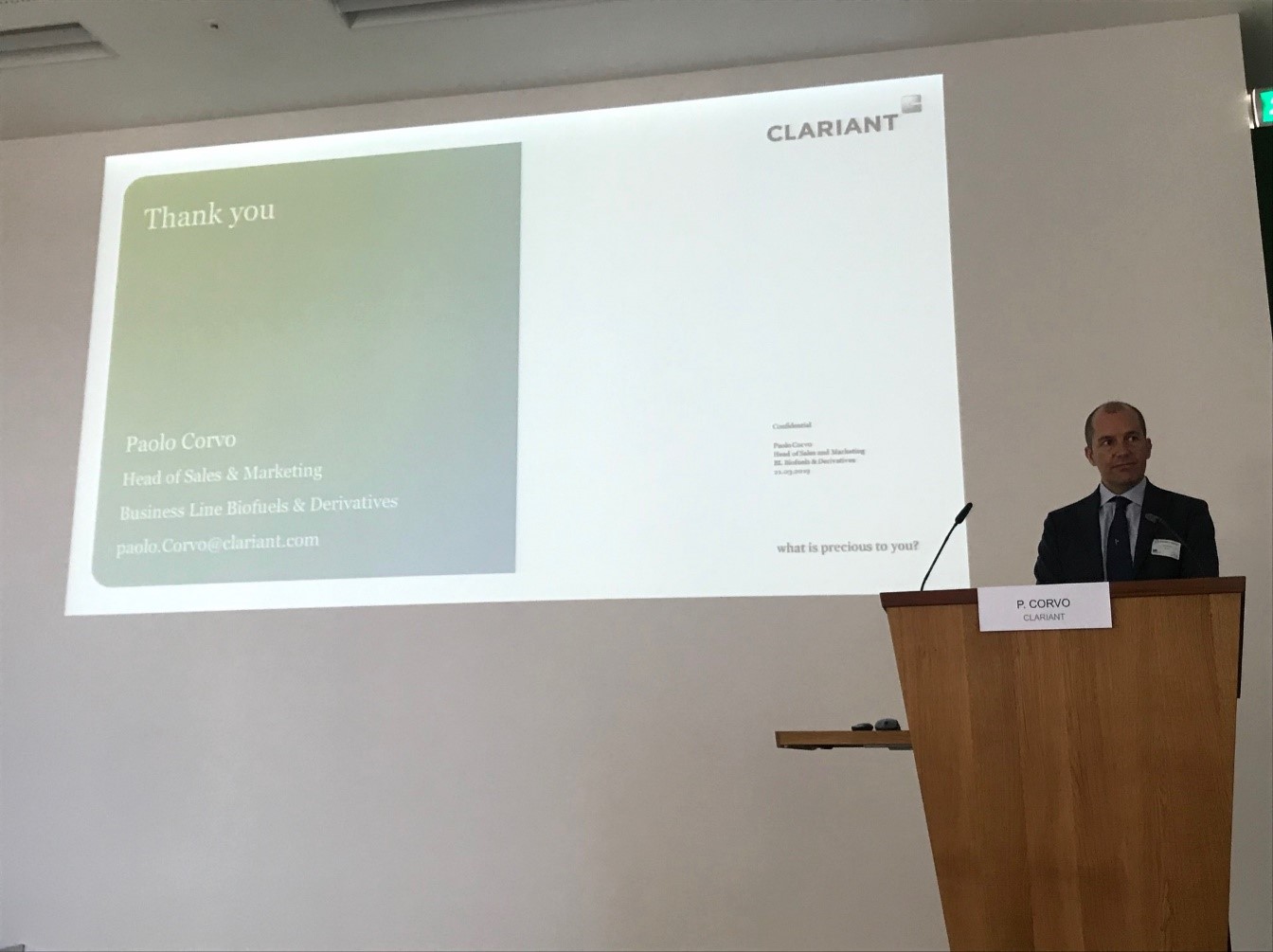 Paolo Corvo (Clariant, Germany), after his presentation in Straubing

The last presentation of the workshop was given by Paolo Corvo, who is Head of Sales & Marketing, BL Biofuels & Derivatives at Clariant. This presentation was about a technology that is already at the point where the BABET-REAL5 concept shall be one day. 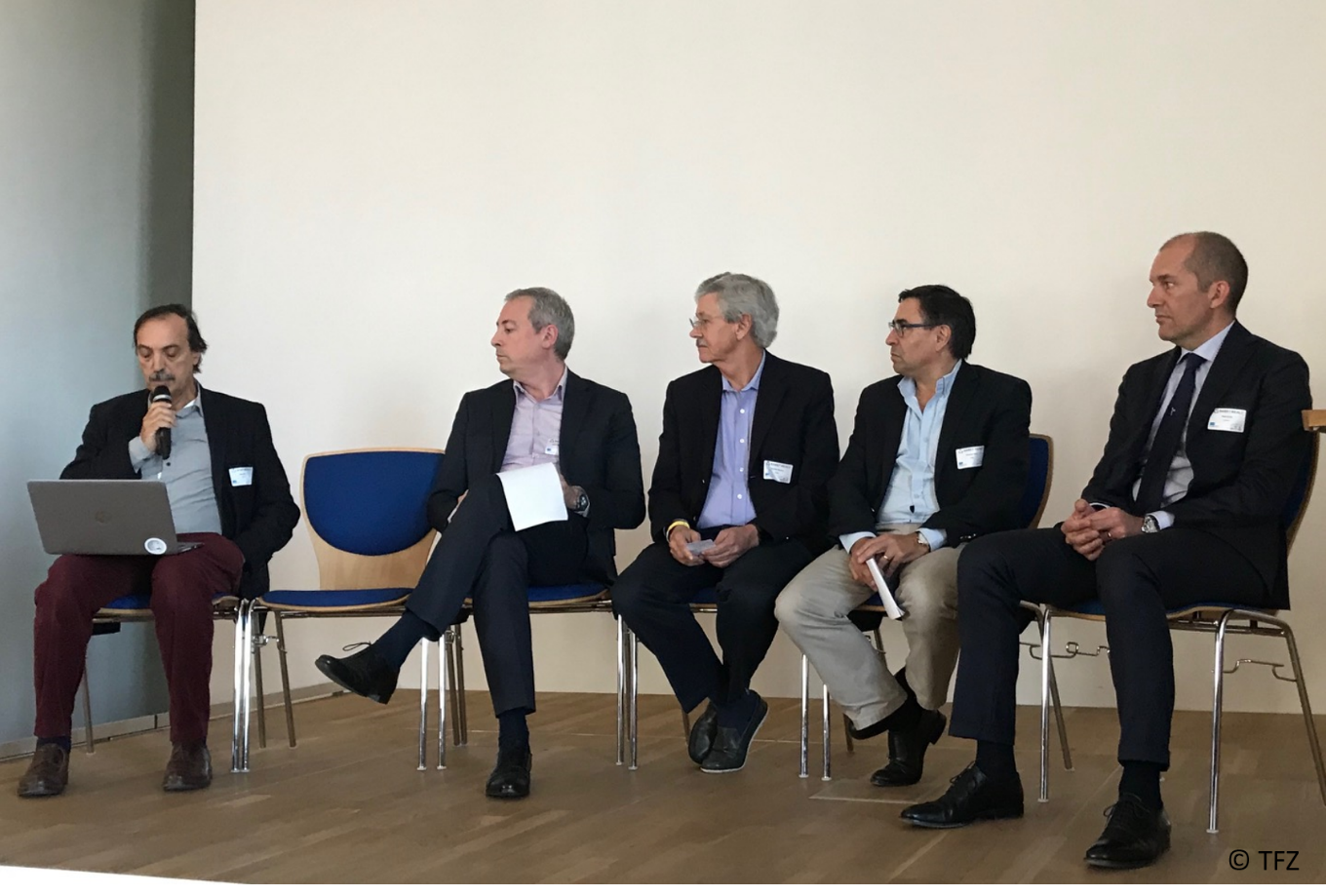 The panelists were introduced and asked about their point of views on chances and risks of 2G bioethanol plants in Latin America and Europe.

Summary of the panel discussion:
Jorge Hilbert started the discussion and presented the Argentinian perspective on the bioethanol market which is steadily growing with high tech 1G plants. He pointed out that enlarging the quantity and quality of coproducts is essential to reach a sustainable business. On the environmental sides cero effluents and minimizing the negative impacts of the whole transformation chain is crucial. According to Mr. Hilbert, the main aspects that play a role for a successful bioethanol business are price and availability of the biomass at the plant gate and of course also for the different outcome products from the biorefinery. Technically, Mr. Hilbert is convinced that not only the 2G bioethanol production needs to be fostered, but that also 1G bioethanol production can be accepted if negative consequences can be excluded. There may even be good possibilities of combining 1 and 2G plants adding their advantages.
Next, Carlos Alberto Fernandez focused his comments on the regulatory aspects of the RED II, in which he sees good and bad at the same time. He stated that the obligatory targets for Advanced biofuels are of course good for the market, however he also stated that the landscape for investments is harmful today because of a long-term uncertainty. Regarding the public perception, the new obligation that bioethanol must not contain palm oil, Mr. Fernandez sees a chance that the reputation of European biofuel can improve. However, he also identified a potential trouble field, the intensive fostering of e-mobility in Europe. Mr. Fernandez concluded his point that after all, he sees a chance for Advanced Biofuels if they are complementary used on the way to decarbonize the mobility sector.
From the Mexican perspective, Eduardo Barzana stated that the theoretical chances there are excellent, in terms of biomass (Blue Agave Bagasse) availability that remains as residues of the Tequila industry. Furthermore, there are good relations between research and industry in Mexico, that could be used to foster future collaboration. The identified risk that could inhibit the fast development of 2G bioethanol production is the common practice of composting in Mexico and that the financial framework can be considered as uncertain, Because of this, Mr. Barzana is in favor of small-scale solutions that also enable small companies to invest in the business.
Francisco Gírio from Portugal identified the decarbonization of the mobility sector as a chance for more biofuel production. The increased gasoline consumption that is predicted for Europe will go along with more obligatory blending with bioethanol. Mr. Gírio criticized the political decisions of the last 10 years that have led to an unstable environment for the biofuel sector. Until 2030, with the RED, II in theory stable conditions exist. However, to reach the ambitious goals, 100 new plants with a production of 50,000 t bioethanol are needed in Europe. That is clearly a chance for economical viable concepts in the near future. Mr. Gírio also believes that forest residues will play a role for biofuels in the future. He concluded that he sees a need for e better roadmap that match also the identified need for more Advanced Biofuels. In addition to the chances for biofuels, Mr. Gírio mentioned in the end of his statement, that the potential uses for bioethanol are more than only as biofuel for cars, either as possible fuel for planes or as building block for other chemicals.
The last panelist, Paolo Corvo from Clariant, was asked by the Rainer Janssen why Clariant now decided to invest in the own plant. Mr. Corvo revealed that Clariant has analyzed the market development and identified a lack of investment in the industry although the technology is available. Only six 2G bioethanol plants have been built worldwide so far. He went on, revealing that the main decisive aspects for a 2G bioethanol plant are to secure the feedstock, have viable CAPEX and OPEX and having a stable market for the ethanol. Furthermore, big plants that process per year 250,000 t of biomass must be able to use different feedstocks. Paolo Corvo, finished his statement, emphasizing that in Europe a market for bioethanol exists.

Conclusions of the 1st BABET-REAL5 workshop

The conclusions of the workshop were made by Rainer Janssen. He summarized the workshop briefly as time was already short. He mentioned the challenge to find enough biomass in times when farmers are more aware of sustainable farming and thus reluctant to provide needed biomass. Small-scale solutions can be a solution to build more plants that can handle less input. Having also more insight on the social aspects a comprehensive scenario is given to decide realistically on the chances for new 2G bioethanol plants.
The political framework in the EU has improved for biofuels with the RED II and it will be interesting to see whether the 100 new plants will be built that are required. Finally, the example of Clariant’s sunliquid shows the market is in motion and one can at least partly look optimistic into the future for bioethanol and thus also for the chances of the BABET-REAL5 project. With this fair outlook, Rainer Janssen thanked the workshop participants and officially closed the workshop.

KoNaRo – Visit of Centre of Excellence for Renewable Resources

After the workshop, Klaus Thuneke gave a guided tour over the testing and trial facilities of TFZ which was highly appreciated by the participants. 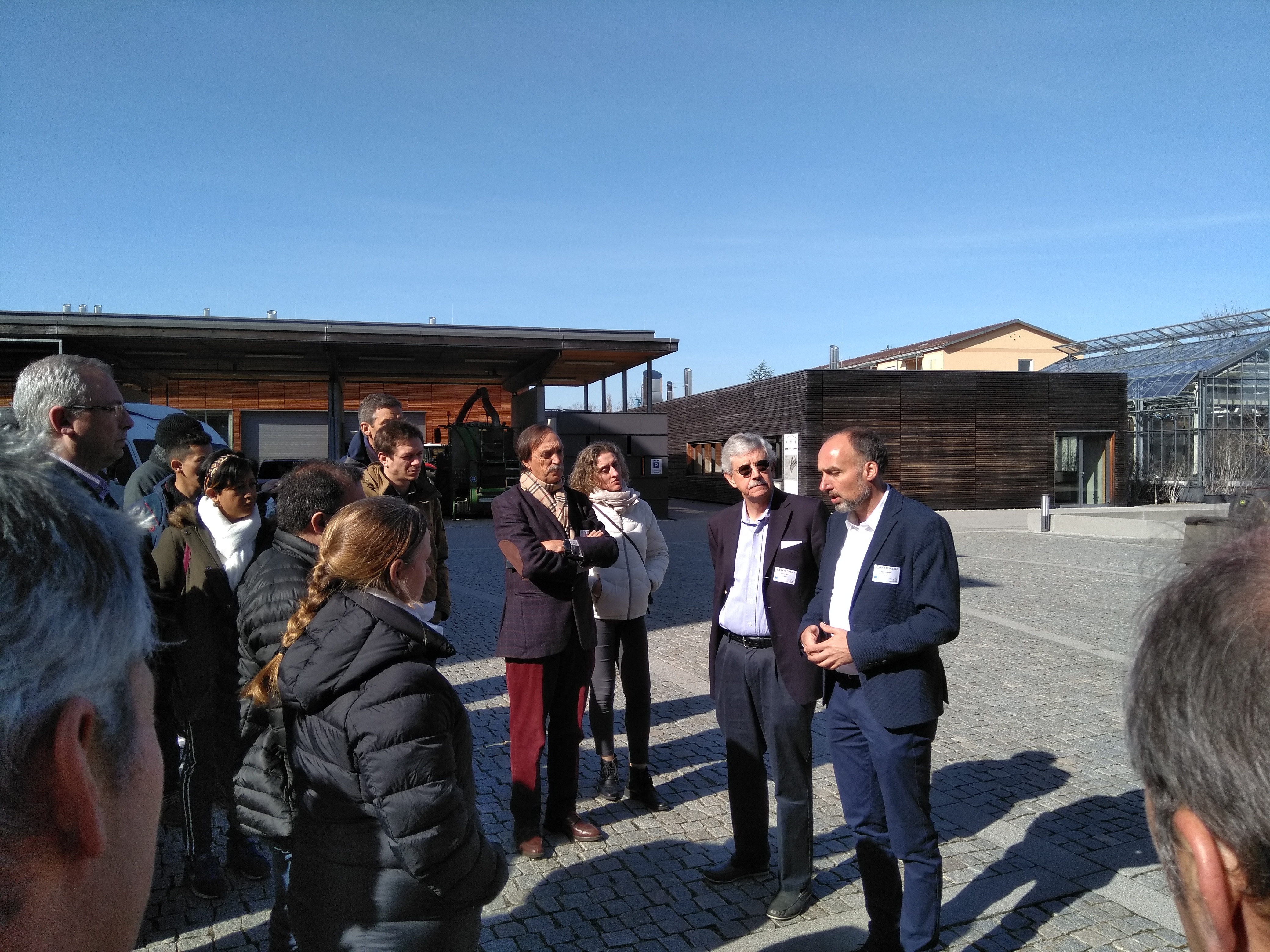 Klaus Thuneke (TFZ, on the right) showed the trial and testing facilities of TFZ to the participants of the 1st BABET-REAL5 workshop.