Between 24 and 26 October 2018, the BABET-REAL5 project was again presented at an international congress, the 4th Ibero-American Congress on Biorefineries in Jaén, Spain.
Dr. Aleta Duque (CIEMAT, Spain) and Ingo Ball (WIP Renewable Energies) presented results about their work in the project.

On 24 October, Dr. Aleta Duque presented the results about Sugar production from barley straw through an integrated pretreatment of alkaline and enzymatic extrusion. 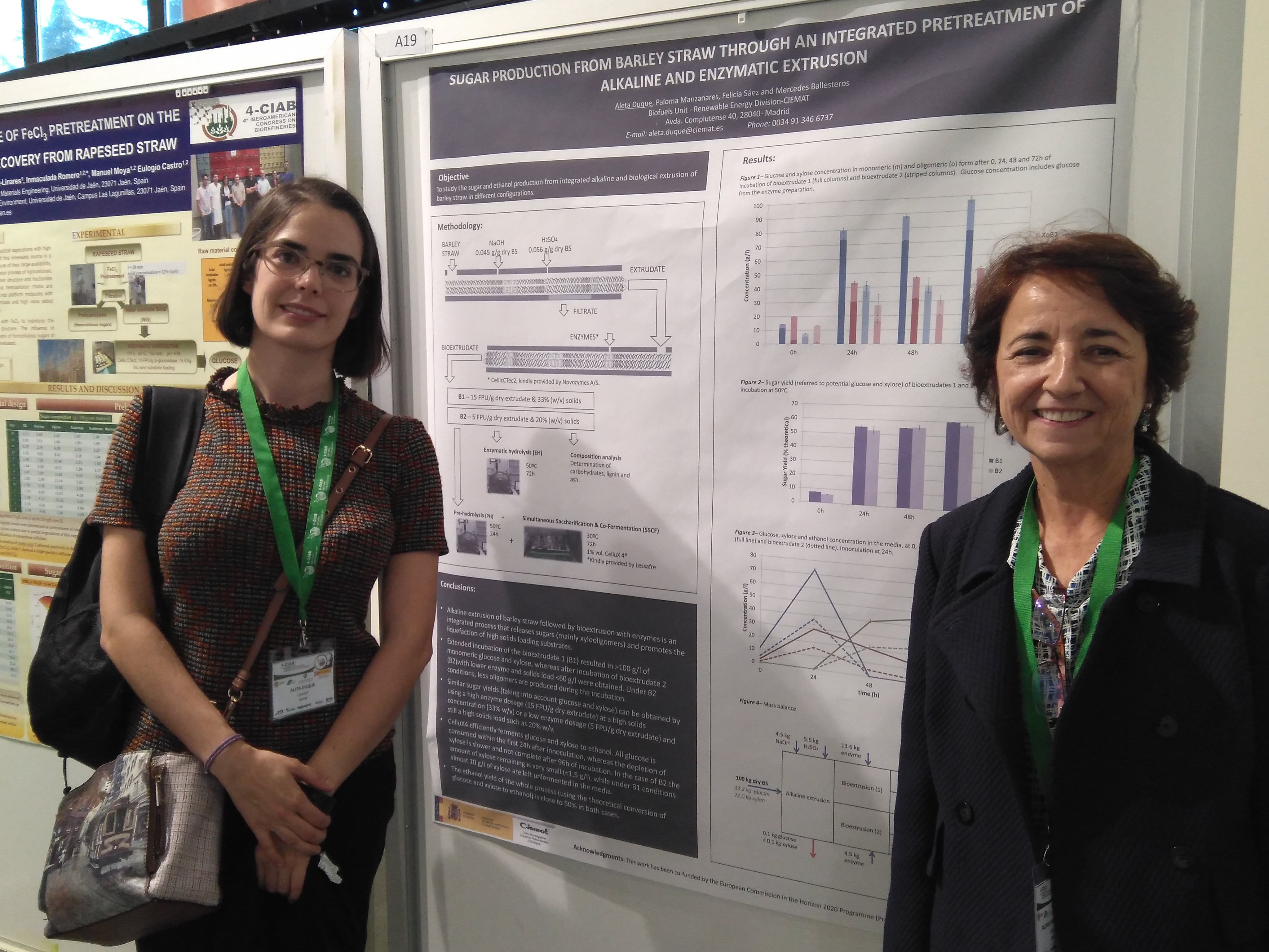 Dr. Aleta Duque (left) and Dr. Paloma Manzanares from CIEMAT in front of the presented poster

Biomass pretreatment is an essential step previous to the use of carbohydrates found in lignocellulose for the production of ethanol and other value-added products. Compared to pretreatments carried out at high temperatures and pressures, often too costly, extrusion can be successfully applied to lignocellulosic biomass pretreatment under much milder conditions [1]. Extrusion pretreatment is based on the rotation of one or two screws inside a tight barrel with temperature control, where biomass is submitted to heating, mixing with catalyst and shearing, leading to physical and chemical changes. In a further integration step, extrusion has been used to efficiently mix hydrolytic enzymes with the pretreated biomass at a very high solids load in a process called bioextrusion, promoting the liquefaction and initiation of the hydrolysis of carbohydrates [2]. In this work, bioextrusion is performed at two different enzyme and solids loads: 33% w/w solids and 15 FPU/g dry extrudate (B1), or 20% w/w solids and 5 FPU/ g dry extrudate (B2). The resulting bioextrudates are submitted to full enzymatic hydrolysis (EH) and also to simultaneous saccharification and fermentation with 24h pre-hydrolysis step (PH-SSCF). EH and PH-SSCF yields were about 60 and 50%, respectively, in B1 bioextrudate, and slightly lower in B2, with reduced enzyme dosage. 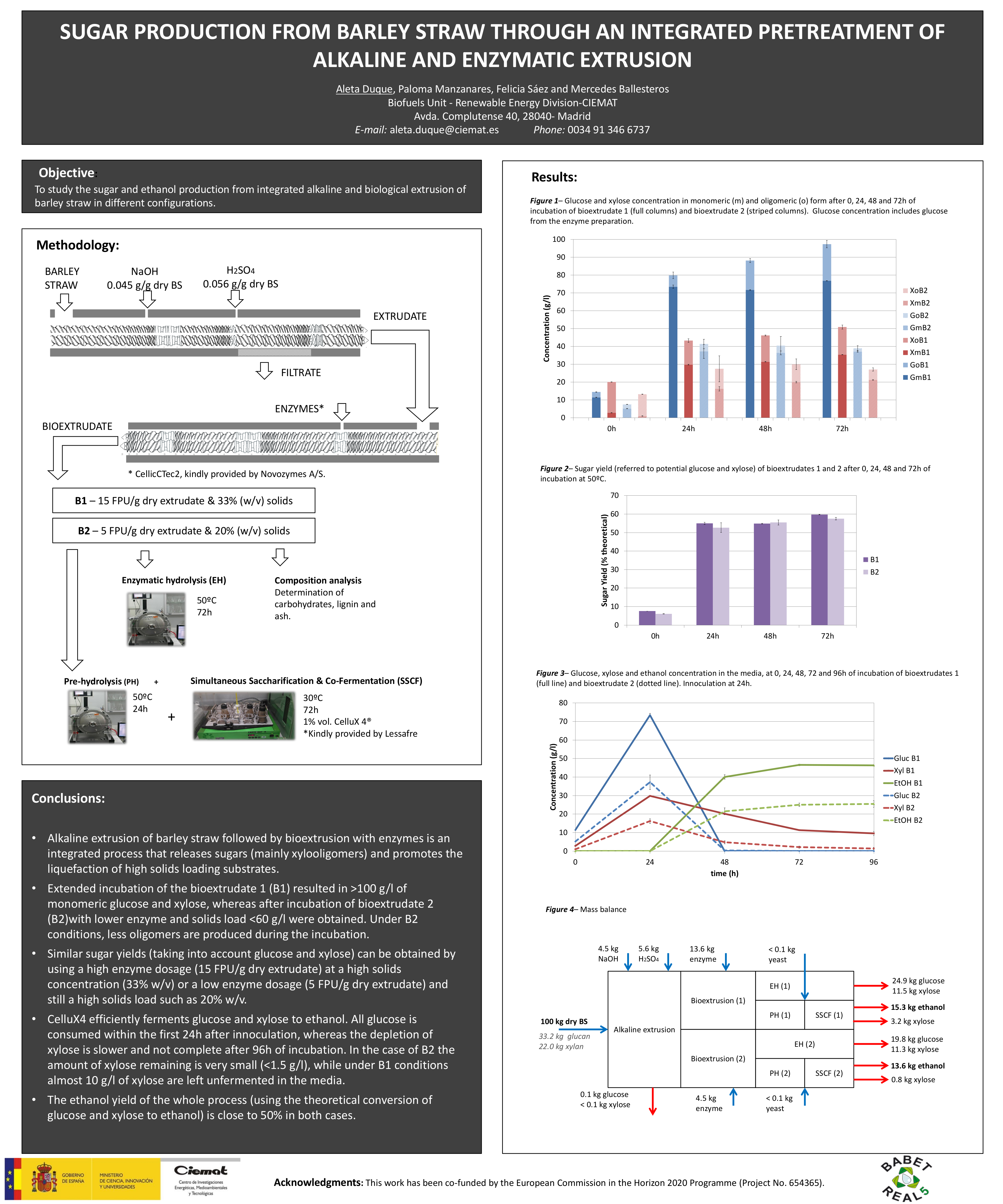 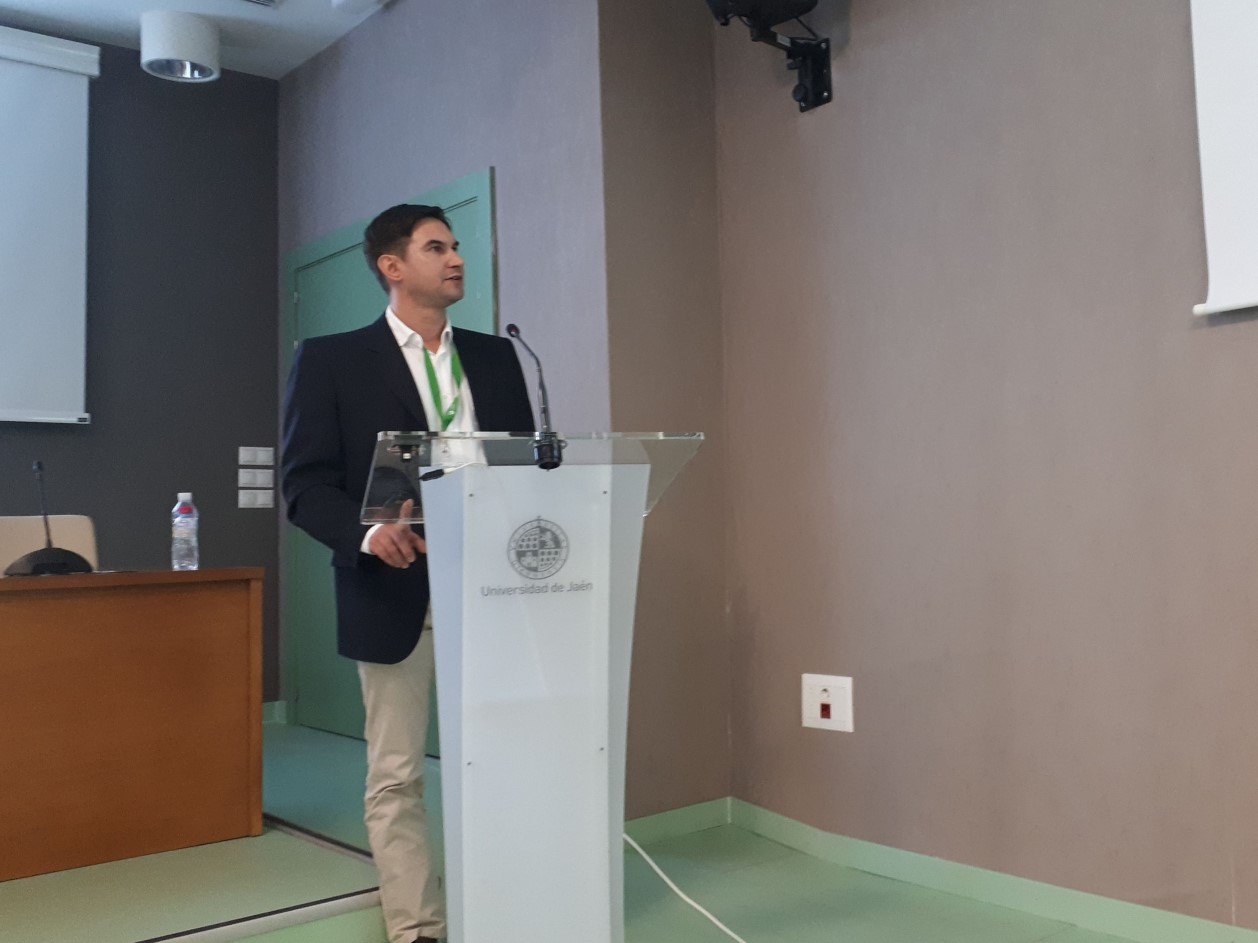 Ingo Ball during his presentation at 4CIAB

Ingo Ball started the talk, reminding the audience that the production of 2G bioethanol needs to be economic viable and sustainable so that it is widely accepted and able to contribute to a more climate friendly fuel portfolio. In his work, it was investigated whether regions can be found in Bavaria, in which more than 30,000 tdm/y are available in a 50-km radius and the preconditions for a sustainable feedstock (a.o. soil carbon, climate change) are fulfilled. Investigated were the feedstocks wheat straw, rye straw, barley straw, oat straw, rapeseed straw, triticale straw and corn stover. It could be shown, that in the region Lower Bavaria, in a 50-km radius area around the city Landshut enough wheat straw (~ 121,000 tdm/y) is available for the production of 2G bioethanol. Furthermore, it was found, that in Bavaria these amounts (i.e. the yields) can be also be provided when the local consequences of climate change are considered, as the negative impacts (i. e. heavy precipitation or heat waves) are presumably compensated by positive impacts (i. e. longer vegetation period, more CO2 for plants growth). Of the seven investigated feedstocks, wheat straw has the best pre conditions as sustainable feedstock in the investigated region.
A first calculation of the environmental impact of the feedstock supply revealed that per supply ton of wheat straw 11.0 kg CO2eq needs to be considered. Ingo Ball concluded the presentation by stating that it is possible to find sustainable feedstock potentials of at least 30,000 tdm/y of wheat straw in a 50-km radius zone near the city of Landshut. With amounts of sustainable 121,000 tdm/y, the threshold of 30,000 tdm/y is exceeded by far. The potential risks of soil erosion, biodiversity and climate change seem to be manageable in Bavaria, and the wheat straw feedstock can be provided sustainably also in the future (taking into account climate change). It needs to be further investigated, whether the local farmers are willing to supply the feedstock and if then still the concept can be economical viable.

More information about the congress: http://ceaema.ujaen.es/4CIAB/home-2/